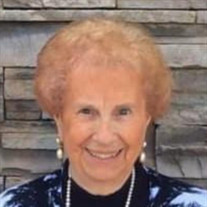 Betty Bowden McGowan moved to heaven this past week at the age of 94. A native of Newnan, Georgia, Betty most recently was identified as holding a record as one of the longest active members of the Woodland Park Baptist Church congregation. She is remembered by many area residents she served in her over 50-year career as the right hand to numerous physicians in private practice. Doctors used to joke that they (the MD's) would come and go but "Betty Mac" was the constant for patients! In her early Chattanooga years Betty was part of two different quartets led by her father, who moved the family to Chattanooga in 1943, answering the call of leading choirs and singings in various area churches. Betty was a lifelong fan of baseball and one of the BIGGEST Atlanta Braves fans. She would impress any baseball afficionado with her knowledge of the Braves roster and each player's performance. Betty was preceeded through the Pearly Gates by her parents, Clifford and Ada Bowden and siblings Edgar, Dan and Bob Bowden and Irene Price. She is survived by her son Garry McGowan Mac, Chattanooga; sister, Esther Follis (Richard), Chattanooga, grandchildren Kellan McGowan, Austin TX, Brittany Kolodziej (Mike), Hendersonville, TN and Hunter McGowan, Seoul, South Korea, and great-grandson Watson Kolodziej, Hendersonville, TN whose pictures she admired daily (great grands do that to you!) and a half dozen nieces and nephews. The family is grateful for Dr. Bertrand Anz and all the sweet ladies at Tennessee Oncology who were so attentive, kind and sweet to 'Miss Betty'. And a special shout out to Taylor in the back! Love goes out to Betty's cheerleaders Karen Sloan and Jean Payne. As well, a big hug of thanks to her baseball buddies David Carroll (Betty's favorite news anchor even when her own son was one!) and Noble Bowie in Florida. And family thanks God for her friends Wanda and Diane, two of the best. Finally, big hugs to Kendra and the team at Summit View Senior Living for their love and support. And a very special thank you to Tiffany and Cheryl who were there for Betty at the most critical time. The burial will be a private, family event. In lieu of flowers, friends should make a gift to the Memorial Hospital Foundation, Skillern Cancer Institute, 2525 deSales Avenue, Chattanooga, TN. 37404 or memorial.org/foundation. Arrangements are by Ryan Funeral Home & Crematory, Trenton, GA.

Betty Bowden McGowan moved to heaven this past week at the age of 94. A native of Newnan, Georgia, Betty most recently was identified as holding a record as one of the longest active members of the Woodland Park Baptist Church congregation. She... View Obituary & Service Information

The family of Betty Bowden McGowan created this Life Tributes page to make it easy to share your memories.

Betty Bowden McGowan moved to heaven this past week at the age...

Send flowers to the McGowan family.