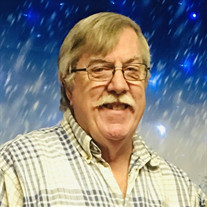 It is with saddened hearts that the family of Bruce Brandon announces his unexpected passing on Tuesday, April 7, 2020 at the age of 59, leaving behind his wife, Yvonne Straughn Brandon, his adored step-son, Jacob, mother and father-in-law, Helen & Denis Straughn, two sisters, a niece & two nephews, as well as many close cousins. Bruce was born on May 5, 1960 to Constance Theresa (Murray) Brandon & Captain Gilbert Brandon at DeWitt Army Hospital in Fort Belvoir, Virginia. Bruce was the baby brother to his sisters, Barry Ann Bark Brandon, Sally Ann Brandon & Holly Ann Brandon. He graduated from Pallotti High School and continued his studies at U.T.C. , then on to Florida State University where he received his B.S. degree in Criminology. After his graduation, he spent time on an internship as a police officer in Ocean City, MD, police dispatcher, then on to work in security personnel in Somalia for the Marines. He spent some time working as a private investigator doing private security detail and volunteered as a firefighter. With his love of travel, Bruce later turned his career to trucking and enjoyed the feel of the open road an over-the-road trucker, rolling his big rig mile after mile. He was preceded in death by his parents, Constance & Major Gilbert Brandon, along with his sister, Barry Ann Bark Brandon. Cremation with interment of ashes will be scheduled at a later date followed by a memorial service at the North Dade Volunteer Fire Department in Wildwood, where he served as a volunteer fire fighter. His love of fire engines, dedication, and desire to helping save the lives of others is a testament to his dedication of his fellow man. Expressions of sympathy may be shared at ryanfuneralhome.net. Arrangements are by Ryan Funeral Home & Crematory, Trenton, GA.

It is with saddened hearts that the family of Bruce Brandon announces his unexpected passing on Tuesday, April 7, 2020 at the age of 59, leaving behind his wife, Yvonne Straughn Brandon, his adored step-son, Jacob, mother and father-in-law,... View Obituary & Service Information

The family of Bruce Enzer Brandon created this Life Tributes page to make it easy to share your memories.

It is with saddened hearts that the family of Bruce Brandon announces...

Send flowers to the Brandon family.