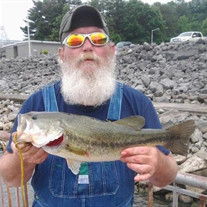 Carmen Rush, Jr., age 54, of Pisgah, AL passed away January 19, 2016. He was a member of Ider Church of Christ. Mr. Rush was an avid outdoorsman whom enjoyed fishing, hunting, and playing music. He was loved by many and enjoyed catching up... View Obituary & Service Information

The family of Carmen Rush Jr created this Life Tributes page to make it easy to share your memories.

Send flowers to the Rush family.