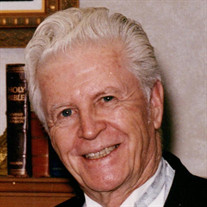 Dr. Clarence Donald Cheatham, 97, of Tullahoma, Tenn., passed away on Friday, Sept. 18. Dr. Cheatham was an educator, scholar, writer and army veteran, and was a devoted husband, father, son, grandfather, brother, uncle, mentor and friend. He was born on Aug. 22, 1923, in Flomaton, Ala., to the late Peter Wilson and Frances Pearl Donald Cheatham. He volunteered to serve in the U.S. Army Air Corps during World War II, achieving the rank of corporal and specializing in radar technology during its early days. He was a graduate of Flomaton High School, and earned bachelor’s degrees in economics from Howard College (now Samford University) in Birmingham, Ala., and in journalism from the University of Georgia in Athens. He also held master’s and education specialist degrees and a doctorate from UGA. Dr. Cheatham taught junior high and high school in the Dade County school system in Trenton, Ga., from 1952 until 1970. He was a professor of political science and history at Motlow State Community College in Tullahoma, Tenn., from 1970 until his retirement in 2014 at the age of 90. The honors center at Motlow is named for him. In addition to his parents, he was preceded in death by his siblings: Annie Lou Phillips, Edward Cheatham, Pauline McConnell, Roy Cheatham, Pearl Renfroe, Judy Turberville, H.W. (Pete) Cheatham, Mary Davis and William R. (Bill) Cheatham. He is survived by his wife of 60 years, Patricia Wheeler Cheatham; his daughters and son-in-law, Mary Ellen Cheatham and Carol and Larry Dornink; his grandchildren, Pierce, Anna and Caris Dornink; and several nieces and nephews. Dr. Cheatham leaves behind a rich legacy of determination, persistence, kindness, humor, generosity, a strong sense of justice, a love of learning and his spiritual faith. He deeply loved his family. Dr. Cheatham was buried with full military honors. Services and interment were private. Arrangements are by Ryan Funeral Home & Crematory, Trenton, GA.

The family of Dr. Clarence Donald Cheatham created this Life Tributes page to make it easy to share your memories.

Send flowers to the Cheatham family.