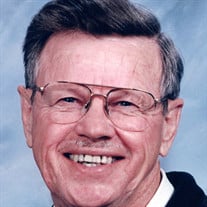 Rev. Dr. Curtis R. Schofield, 82, of Flat Rock, Alabama, went home to be with his Lord on Saturday, November 30, 2019 at his residence. Curtis R. Schofield has been married to Clara Slater Schofield since 1961. They have two children: Stephen is a pastor in the North Georgia Conference of The United Methodist Church, and Philip is a civil engineer in Chattanooga, Tennessee Curtis Schofield was born in Elderon, Wisconsin on March 12, 1937 to the late Earl & Ruth Schofield, and moved to Tennessee at age 10. He was invited to Sunday School contest at age 13 at Lafollette Methodist Church, where he gave his life to Jesus. Dr. Schofield is a graduate of Hiwassee College, Tennessee Wesleyan College, and Candler School of Theology, Emory University. In addition to the Master of Divinity Degree, Dr. Schofield has earned from Emory University a terminal degree, The Doctorate in Sacred Theology with an emphasis on pastoral care. Dr. Schofield has been a member of the clergy of Holston Conference of the United Methodist Church since 1961. For most of his ministry he served as pastor of churches in the Knoxville and the Chattanooga areas of East Tennessee and North Georgia. Dr. Schofield served as the founding director of Contact Ministries of Chattanooga, a Christian telephone counseling ministry, and as President of Hiwassee College(1984-1988) and as Vice President of the Foundation for Evangelism at Lake Junaluska, North Carolina. From January 1994-June 1997 Dr. Schofield served as senior pastor of Hixson UMC, one of the largest churches in the Holston Conference. For the next four and one half years(January 1998-June 2002) Dr. Schofield served as the Vice President of Development for The Mission Society for United Methodists, with offices in Norcross, Georgia, sponsoring over 200 missionaries in over 30 countries. Dr. Schofield is a general evangelist with the National Association of Evangelists of the United Methodist Church. He has been elected six times as a delegate from Holston Conference to the Jurisdictional Conference. He has served as the chair of the communication committee on the SEJ Council of Ministries, and has served as the chair of the volunteer in missions committee on the Holston Conference Council on Ministries. Survivors include his wife of 58 years, Clara Slater Schofield; sons, Stephen (Debbie) Schofield, Dahlonega, GA, & Philip (Michelle) Schofield, Hixson, TN; grandchildren, Faith, Luke, Nathan, Sam, & Paul; brother, Anthony (Bobbie) Schofield, St. Louis, MO. Funeral services will be conducted on Wednesday, December 4, 2019 at 1:00 p.m. at the Trenton United Methodist Church with Dr. Brad Scott, Rev. Curtis McKee, & Bishop Richard Looney officiating. Interment will follow in Oak Lawn Memorial Park in Bryant, Alabama. Please share expressions of sympathy at ryanfuneralhome.net. The family will receive friends on Tuesday, December 3, 2019 from 3:00 p.m. until 7:00 p.m. at Ryan Funeral Home and Wednesday from 12:00 p.m. until 1:00 p.m. at Trenton United Methodist Church, 12500 N. Main Street, Trenton, GA. Arrangement are by Ryan Funeral Home & Crematory, Trenton, GA.

Rev. Dr. Curtis R. Schofield, 82, of Flat Rock, Alabama, went home to be with his Lord on Saturday, November 30, 2019 at his residence. Curtis R. Schofield has been married to Clara Slater Schofield since 1961. They have two children: Stephen... View Obituary & Service Information

The family of Rev. Dr. Curtis R. Schofield created this Life Tributes page to make it easy to share your memories.

Send flowers to the Schofield family.