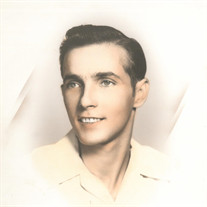 Delbert Leon Gifford, age 95, of Trenton, GA passed away Friday April 7, 2017. He served in the United States Army in the Philippines during WWII. He was a member for over 61 years and a deacon for over 40 years at Calvary Baptist Church. He... View Obituary & Service Information

The family of Delbert Leon Gifford created this Life Tributes page to make it easy to share your memories.

Send flowers to the Gifford family.