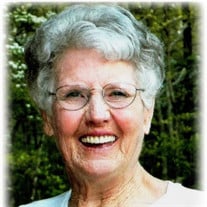 Della Lamel Clayton, age 78, of Trenton, GA went to be with our Lord and Savior Jesus Christ on March 30, 2016. She was of the Baptist faith and a member of the White Oak Baptist Church. Mrs. Clayton was married to her husband, James O. Clayton,... View Obituary & Service Information

The family of Della Lamel Clayton created this Life Tributes page to make it easy to share your memories.

Send flowers to the Clayton family.