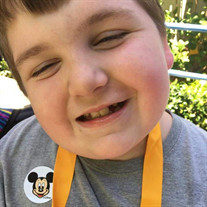 Emerson Elijah Crane, age 10, of Trenton, GA child of God and precious son of Yale and Samantha Crane, left footprints on our hearts as he passed from our arms into Heaven on Tuesday, October 3, 2017, after a courageous, nine and a half year battle with brain cancer. Born on August 30, 2007, Emerson was a source of light, joy, and love to all who knew him. He never met anyone without asking them to be his best friend, and he cared greatly for all people. Emerson’s favorite color was purple, and he never failed to let people know that fact, but also, he asked everyone their favorite color, too, so they could be a member of his special color club. Emerson loved to go to church, to sing with the choir, and attended every Sunday that he was well enough at New England Baptist Church. Emerson is survived by his parents, Samantha and Yale Crane, younger brothers Asher and Isaac Crane; “Mom”, grandmother, Tura Chamblee Crawford (Billy Whitley); grandfather, Buzzy Crawford; great grandparents Buddy and Betty Crawford, all of Wildwood, Georgia; great grandparents, Doyle and Doris Chamblee, of Bryant, Alabama; Uncle Brandon (Brandy and Alex) Evans; Aunt Stephanie (Dion) Tipton; Aunt Dolly (Jonathan and Raven) Stone; Uncle Butch (Rena) Roberts; Aunt Lola McMillan. Emerson was preceded in death by his paternal grandparents, Yale and Julene Crane. The family will receive friends at Trenton First Baptist Church on Friday, October 6th, from 2pm until 8pm, and Saturday, October 7th, from noon until 2pm. His memorial service will start at 2pm on Saturday, October 7th, at Trenton First Baptist Church. We request that everyone wear purple in honor of Emerson. In lieu of flowers, donations may be made in honor of Emerson to any of the following charities that have served our family over the years: the Butterfly Fund of the Pediatric Brain Tumor Foundation - Georgia Chapter; Blue Skies Ministries; Atlanta Ronald McDonald House Charities; or CURE Childhood Cancer.

Emerson Elijah Crane, age 10, of Trenton, GA child of God and precious son of Yale and Samantha Crane, left footprints on our hearts as he passed from our arms into Heaven on Tuesday, October 3, 2017, after a courageous, nine and a half year... View Obituary & Service Information

The family of Emerson Elijah Crane created this Life Tributes page to make it easy to share your memories.

Send flowers to the Crane family.