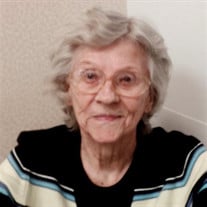 Eunice F. Clark, age 90, of Trenton, GA died Monday January 15, 2018. She was a housewife and homemaker, mother, grandmother, great-grandmother, and a great-great-grandmother. She was preceded in death by her husband Ozell Clark, Sr.; son... View Obituary & Service Information

The family of Eunice F. Clark created this Life Tributes page to make it easy to share your memories.

Send flowers to the Clark family.