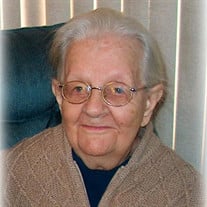 Evelyn M. Winters, age 91 of Trenton, GA and formerly of Forest Hill, MD went to be with her Lord on January 21, 2017. She was a member of the Rosedale Baptist Church in Baltimore, MD and attended Edgewood Baptist Church in Trenton, GA. Mrs.... View Obituary & Service Information

The family of Evelyn Margaret Winters created this Life Tributes page to make it easy to share your memories.

Send flowers to the Winters family.