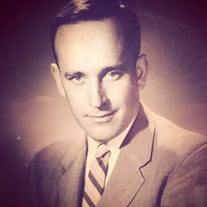 James Ramsay Stewart (January 30, 1928 – June 4, 2018) passed away peacefully on Monday from congestive heart failure. He will be greatly missed by his wife, Betty Jane Stewart, and his devoted children, grandchildren and great-grandchildren. Jim was born in East Orange, New Jersey during his parent’s first visit to America from Scotland, but he soon returned to his home country spending his early childhood years just outside of Glasgow. Jim descended from a proud Scottish family with a father and uncles who were highly decorated Seaforth Highlanders during World War II. By Jim’s early teens, he was back in Bloomfield, New Jersey where he was an acclaimed athlete eventually earning seven college scholarships and, later, six major league baseball contracts. Jim met his wife Elizabeth Jane Bennett at the College of William and Mary and married in 1953. Due to sports induced injuries, Jim pursued a career in banking rather than baseball and went on to hold officer positions in Wilmington, DE and White Plains, NY. Following a change of career, Jim taught at several private academies in Stony Brook, Long Island and Wilmington, Delaware, where he coached sports and held head of middle and upper school positions. Shortly after an exchange year teaching at a boy’s college in Llandudno, North Wales, Jim retired to begin, with his wife, their own highly successful antique business. Jim was an excellent businessman and teacher. He was a devout Christian and patriarch of an ever growing, large and close family. He was the loving husband of Elizabeth Jane Bennett for 65 years. He was a kind and attentive father to four children: Rebecca Elizabeth Stewart Chapman (Geoffrey) of Sewickley, Pa; Deborah Jane Stewart Phillips (Charles) of Lookout Mountain, GA; James Bennett Stewart (Susan) of Charlotte, NC; and Robert Ramsay Stewart (Danielle) of Blowing Rock, NC.. Jim has 17 grandchildren and 28 great-grandchildren. His favorite Bible verses were Proverbs 3:5-6. A Graveside service will be held for family and close friends on Saturday, June 9, 2018 at 2:00 PM in the Forest Hills Cemetery, Chattanooga, TN.

The family of James Ramsay Stewart created this Life Tributes page to make it easy to share your memories.

Send flowers to the Stewart family.