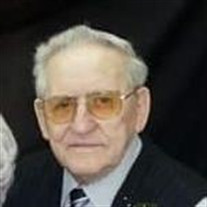 Jerry Calvin &#8220;J.C.&#8221; Daniel, age 78, of Chattanooga, TN born and raised of Higdon, AL went to be with the Lord on early Monday morning May 2, 2016. Mr. Daniel was retired from Culligan Water Conditioning after 36 years of service,... View Obituary & Service Information

The family of Mr. Jerry "J.C." Calvin Daniel created this Life Tributes page to make it easy to share your memories.

Send flowers to the Daniel family.