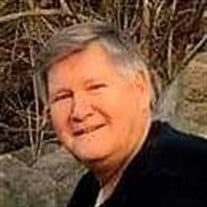 Jesse Franklin Hurd, 75, of Trenton, GA, was a dedicated husband and father that put his family first in everything that he did throughout his life. On October 16, 2021, He passed away following the burial of his step-daughter, Becky Summerford, who had recently passed on October 4, 2021. Mr. Hurd, a resident in Trenton for over 30 years, was an avid NASCAR and Atlanta Braves fan and he could also be found fishing on the river or working on cars. His family have many memories attending NASCAR events in Talladega and going to the Atlanta stadium to watch the Braves games when he wasn't watching them on the television. Jesse had lived in several states during his lifetime including the windy city of Chicago and he often shared his favorite memories of his life there along with his favorite places to visit. On February 14, 1987, Jesse married Pam Summerford and they established a family in Trenton, Georgia for over 30 years. Mr. Hurd leaves behind his wife, Pam Hurd, a family of two step-daughters (one deceased), three sons, and five grandsons, Stacy (Harold) Daniels, Becky Summerford (deceased), Shawn Hurd, Travis (Chastity) Hurd of Crossville, Troy (Zohreah) Hurd of Nashville, Tyler, Nic (Robyn) and Zac (Grayce) Daniels of Trenton and Tanner and Talyn Hurd of Crossville. Jesse will always be remembered by his profound kindness to strangers and never letting his struggles in life deter him from giving the shirt off of his back to his family, friends or even strangers that he saw needed something that he could help with. His old-fashioned sense of compassion will live on in the hearts and memories of his step-daughters, sons and grandsons to never be forgotten or taken for granted. Expressions of sympathy may be shared at ryanfuneralhome.net. Graveside services will be held Friday, October 22nd at 1:30 p.m. at Lake Hills Memorial Gardens with David Parker & Rodney Wooten officiating. The family will receive friends Friday, October 22nd from 11:00 a.m. until 1:00 p.m. at Ryan Funeral Home & Crematory, Trenton, GA.

Jesse Franklin Hurd, 75, of Trenton, GA, was a dedicated husband and father that put his family first in everything that he did throughout his life. On October 16, 2021, He passed away following the burial of his step-daughter, Becky Summerford,... View Obituary & Service Information

The family of Jesse Franklin Hurd created this Life Tributes page to make it easy to share your memories.

Jesse Franklin Hurd, 75, of Trenton, GA, was a dedicated husband...

Send flowers to the Hurd family.