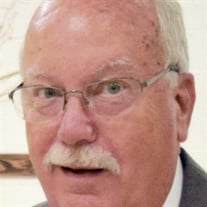 After a lengthy illness with Parkinson’s Disease, the Lord has called Tommy home. He passed away on Wednesday, October 9, 2019 at the Hospice Care Center. No words can describe how much he will be missed. Tommy leaves to treasure his memories his wife of 52 years, Linda Harp Manning; daughter, Kimberly Brown; son-in-law, Eric Brown and grandson Joshua Brown that he thought the world of. Tommy was extremely devoted to his family. He is also survived by siblings Patricia Snyder, William Manning (Judy), Rose Simmons (Malvin), Paul Manning (Christine), sister-in-law Janie Manning, sister-in-law Charlotte H. Palmer (Glenn), brother-in-law William Larry Harp (Joye) and a host of loving nieces, nephews and friends. He was preceded in death by parents Gladston and Marie Manning, brother Joe Manning, sister Avis Jane Manning and father and mother-in-law Bill and Juanita Harp. Tommy graduated from Central High School in 1962 and obtained an Associate’s Degree in accounting from Edmondson College. In 1967, Tommy enlisted in the United States Navy and served aboard the U.S.S. Talbot County LST for two years and with the Navigation Aids Support Team for two years in South Korea. He received an Honorable Discharge in 1971. Tommy then retired from DuPont after serving 39 ½ years. Tommy became a member of Lookout Valley Baptist Church in 1971 where he remained a member until the time of his death. He served as a Deacon, Sunday School teacher, R.A. Director, cook for Wednesday night suppers and ladies softball coach. Tommy enjoyed spending time with others and lending a helping hand whenever he could. He also loved woodworking and working in his yard. Tommy was a volunteer with Hospice of Chattanooga. The family will receive friends at Lookout Valley Baptist Church on Sunday, October 13, 2019 from 3:00 p.m. to 7:00 p.m. and again on Monday, October 14, 2019 from 12:00 p.m. until the time of service. Funeral services will be held at the church on Monday, October 14, 2019 at 2:00 p.m. with Dr. Alan Johnston and Rev. Troy Walliser officiating. Interment will follow in Lakewood Memory Gardens, West with full military honors. Eric Brown, James Palmer, Larry Harp, Brad Harp, Darrell Smith & Alan Houts will serve as pallbearers. Church O'Mary & Joshua Brown are honorary pallbearers. In lieu of flowers, contributions can be made to Hospice of Chattanooga, 4411 Oakwood Drive, Chattanooga, TN 37416 and Lookout Valley Baptist Church Building Fund, 23 Lilac Avenue, Chattanooga, TN 37419. Arrangements are entrusted to Ryan Funeral Home & Crematory, Trenton, GA

After a lengthy illness with Parkinson&#8217;s Disease, the Lord has called Tommy home. He passed away on Wednesday, October 9, 2019 at the Hospice Care Center. No words can describe how much he will be missed. Tommy leaves to treasure his... View Obituary & Service Information

The family of John Thomas "Tommy" Manning created this Life Tributes page to make it easy to share your memories.

After a lengthy illness with Parkinson’s Disease, the Lord has...

Send flowers to the Manning family.