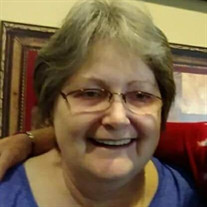 Laura Lee Hicks (56) of Flat Rock, Alabama, passed away in the late evening of August 29, 2017. She was born on July 17, 1961 in Tucson, AZ, raised her children in Ringgold, GA, and had lived in Flat Rock for the last 11 years. She was an avid crafter and loved nothing more than to be quilting, cross-stitching, crocheting, or even just coloring something. When not crafting, she loved to read and spend time with her family and friends. She was survived by her husband, Floyd Alton Hicks, her son Donovan Hicks, her daughter Juniper (Larry) Stell, son Benjamin Hicks, her mother Karen (Bill) Lee, her brother Doug (Kathy) Plummer, granddaughter Alyssa Hicks, grandson Kurtis Stell, niece Jennifer (Andrew) Troub, and niece Jessica (Gary) Williams. She also had an extensive extended family from her husband’s previous marriage, including 4 step children, multiple grandchildren, great-grandchildren, nieces, and nephews. In addition, she left behind many other loving relatives and friends that will miss her greatly. She was preceded in death by her father, Rufford “Bill” Plummer. At her request, she was cremated and there was no service.

The family of Laura Lee Hicks created this Life Tributes page to make it easy to share your memories.

Send flowers to the Hicks family.