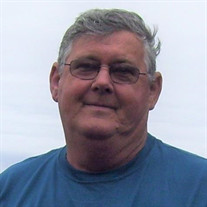 Lloyd Edward Troxtel, age 73, of Trenton, GA, passed away Tuesday morning, April 23, 2019. He was retired from Alstom Power of Chattanooga. He belonged to the Boilermaker Local Union #656 of Chattanooga. He was of the Church of Christ Faith.... View Obituary & Service Information

The family of Lloyd Edward Troxtel created this Life Tributes page to make it easy to share your memories.

Send flowers to the Troxtel family.