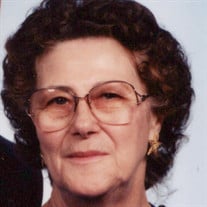 Lottie E. Henegar, 92, of Flat Rock, Alabama, went home to be with her Savior on Friday, September 27, 2019 at her home. She was retired from Top Flight Paper in Chattanooga and was a member of Pleasant Grove Baptist Church. Mrs. Henegar was... View Obituary & Service Information

The family of Lottie E. Henegar created this Life Tributes page to make it easy to share your memories.

Send flowers to the Henegar family.