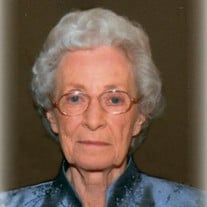 Martha Frances Wells Pullen, of Wildwood, GA, died January 27, 2018, at the age of 98. She is preceded in death by her husband of 67 years, William H. Pullen, Sr., parents Edwin R. and Bennie Brock Wells, and brother Edwin R. Wells, Jr. She is survived by her son William H. Pullen, Jr. (Sandy); three grandchildren William H. Pullen, III (Claudia), Randolph E. Pullen (Qian), and Elizabeth J. Pullen; and three great grandchildren Waylyn, Luca, and Connor. She was a lifelong resident of Dade County, Georgia, and member of Morganville United Methodist Church. She was a graduate of the University of Georgia and a true Bulldog fan, bleeding red and black. She was a member of the Delta Kappa Gamma society of women educators. She retired from the Dade County School system after teaching 5th grade and then high school home economics for over 33 years. She was a sponsor of the 4-H club and Future Homemakers of America (FHA). During WWII she worked for the Department of Defense. She was very active in family mercantile, farming, and forestry here in Dade County. She was active in the Coosa Limestone Valley Soil & Water Conservation District, and Martha was often seen attending Kiwanis Club, Tri- State Cattlemen’s Association, or UGA alumni meetings alongside Bill. Martha’s fulfilling journey of 98 years was made possible by the support of many friends, family, and associates. Our family is thankful for the in-home caregivers, especially Sue, that extended the time that Bill and Martha were able to have together in their home. The staff at Woodhaven Senior Living Center were remarkable in their compassion and care towards Martha, as was Tapestry Hospice for their concern and care. A special note of thanks, gratitude, and appreciation goes to Penny Haswell for the dedication, loyalty, and friendship that she provided to Bill and Martha for over thirty years. Many of the things in the latter years of Bill and Martha’s lives would not have been possible without her. We truly appreciate all the friends, especially Doris Haswell and Ellen Marie Moore, that called or stopped to check on Martha. Martha will be remembered for her love and support of this family, her dedication to this community, and her love for her former students and school system. Funeral services will be held 1PM Monday January 29, 2018 in the chapel with Rev. Brad Scott and Rev. Reece Fauscett officiating. Interment will follow in Brock Cemetery, Trenton, GA. Family will receive friends 2PM until 7PM Sunday and 12PM until service time on Monday at Ryan Funeral Home, Trenton, GA.

The family of Martha Frances Pullen created this Life Tributes page to make it easy to share your memories.

Send flowers to the Pullen family.