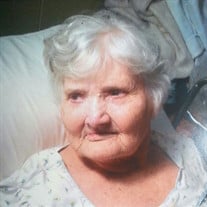 BRYANT, AL – Mary Louise Cooper, 86, of Bryant, AL went home to be with her Lord and Savior on Wednesday December 16, 2015. She was a homemaker, wife, mother, grandmother, and great-grandmother. She enjoyed reading, crocheting, quilting, and helping anyone in need. She always tried to find something good in everyone she met. In all her years here on earth she lived her life as a Christian living for the Lord. She leaves behind a wonderful example of being a child of God. She will be deeply and truly missed by all who knew her. Mrs. Cooper was preceded in death by her husband Lindsay Cooper, two daughters Cynthia Harris and Linda Sue Cooper, mother Emma Hass and father Frank Burnett, two brothers James Burnett and William Burnett, two sisters Frances McNeece and Ellabelle Masterson, and granddaughter Amanda Quarles. Survivors include her children and spouses Carolyn Quarles of Bryant, AL, James and Donna Cooper of Flat Rock, AL, John and Karen Cooper of Bryant, AL, Vicky and Randy Ridgeway of DuQuoin, IL, David and June Cooper of Rising Fawn, GA; 25 grandchildren, 54 great grandchildren, and several nieces and nephews. Special thanks to all the friends, family, and ABC Hospice of Rainsville, AL. Graveside services will be held 12 PM Friday December 18, 2015 at Lake Hills Memorial Gardens with Rev. Wayne Winters officiating. Interment will follow in Lake Hills Memorial Gardens. The family will receive friends 10 AM until 11:45 AM Friday at Ryan Funeral Home, Trenton, GA.

BRYANT, AL &#8211; Mary Louise Cooper, 86, of Bryant, AL went home to be with her Lord and Savior on Wednesday December 16, 2015. She was a homemaker, wife, mother, grandmother, and great-grandmother. She enjoyed reading, crocheting, quilting,... View Obituary & Service Information

The family of Mary Louise Cooper created this Life Tributes page to make it easy to share your memories.

Send flowers to the Cooper family.