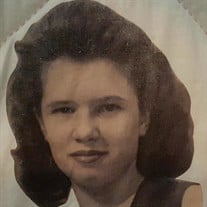 Norma Mae Teague, age 82, of Trenton, GA passed away Tuesday December 1, 2015. She was previously a resident of Webberville, MI, Eufaula, AL, and Hersey, MI. She retired from Meijer. She was preceded in death by her parents Frank and Jessie... View Obituary & Service Information

The family of Norma Mae Teague created this Life Tributes page to make it easy to share your memories.

Send flowers to the Teague family.