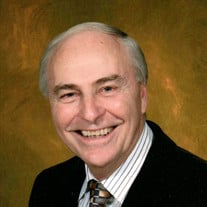 Paul Lamar Dugan, 77, passed away October 30, 2018 after a brief illness. He was born in Rossville, GA the son of the late Harold and Lenora Dugan. He was proceeded in death by brothers, Herschel and Richard Dugan and sisters Martha and Dorothy Dugan. Paul graduated from Tennessee Wesleyan College in 1963. After graduation, he enlisted with The United States Air Force and served from 1963-1967 with most of his tour in Germany and Italy. His career as a public accountant began in Chattanooga. He accepted a position with Crescent Hosiery in Niota, TN in 1988 where he worked until retirement in 2005. Shortly after retirement he rejoined the workforce as an accountant at Baylor School, Trenton United Methodist Church and seasonally at Camp Lookout. Paul lived his life with faith, generosity and kindness – always smiling. He was a loving husband and father, an avid gardener, enjoyed travel and was ever-present in the lives of his grandchildren. Married 48 years, Paul is survived by his wife Stacia, of Trenton, GA and daughters Stephanie (David) Prawd of Trenton and Larissa (Jon) Coleman of Cleveland, TN, grandchildren Tyler (Lyndsie) Ford and Katie Ford and Samuel and Sarah Coleman. He is also survived by his brothers and sisters in-law Tommy (Elsie) Lawson, Bill (Patti) Lawson, Mike (Pennie) Lawson, Beverly Teet, George (Melissa) Lawson, Mary Gamble, Johnny (Rita) Lawson, Bonnie Dugan and Nita Dugan as well as numerous nieces and nephews. Visitation will be held Thursday, November 1st at Ryan Funeral Home from 4-8 pm. The Celebration of Life will be at Trenton United Methodist Church on Friday at 11:00 am with burial at the Chattanooga National Cemetery at 1:00 pm. Honorary “Paul-bearers” will be members of the “Forever Young” Sunday School class, C-group “Pairables” and the Trenton United Methodist Church Choir. The family would like to express our gratitude to Tapestry Hospice and nurse, Michelle Holifield, for the love and care she exhibited. In lieu of flowers, please make donations to Camp Lookout Scholarship c/o Trenton United Methodist Church or Tapestry Hospice.

Paul Lamar Dugan, 77, passed away October 30, 2018 after a brief illness. He was born in Rossville, GA the son of the late Harold and Lenora Dugan. He was proceeded in death by brothers, Herschel and Richard Dugan and sisters Martha and Dorothy... View Obituary & Service Information

The family of Paul Lamar Dugan created this Life Tributes page to make it easy to share your memories.

Send flowers to the Dugan family.