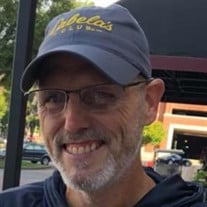 Tuesday, October 23, 2018 Paul G. Gordy, of Trenton, GA (formerly of Austell, Ga), our Superman, made his final flight winning his battle with cancer. A gentleman always knows when to leave the room and he departed his Earthly home, surrounded by his family as well as a host of friends and loved ones. We are at peace knowing that he is no longer in pain or suffering. He has received his ultimate healing and is resting peacefully in the arms of Jesus. He will be greatly missed by all who knew him. Paul leaves behind a legacy of strength, courage, love and compassion. Paul was a veteran of the United States Air Force. During his service he was an aircraft maintenance specialist. He received the Good Conduct Medal and the Air Force Training Ribbon. He served during Desert Storm. He also served many years in the Georgia Air National Guard. Paul was proud to be an American and served his country faithfully and without question. He ended his military service as a Non Commissioned Officer. He was a member of Mount Harmony Baptist Church where he taught Sunday school, and was a member of both the orchestra and choir. Paul was employed by the Dade County School System, where he worked as a custodian and a substitute teacher. He loved the children and families of Dade County and did all that he could to serve them. Paul truly had a servant’s heart. Paul was preceded in Death by his father Alvin Gordy. He is survived by his loving wife of 26 years, Lori Gordy, his sons Devin (Sydni) Gordy (Jacksonville, Al.), Calib (Layla) Gordy (Trenton, Ga.) and Logan Gordy (Trenton, Ga.) His mother Inge Gordy (Austell, Ga.), his sister Rose (David) Pitts ( Douglasville, Ga.) and his brother Kenny (Candi) Gordy (Arizona) as well as many nieces and nephews, a large extended family and a multitude of friends. In lieu of flowers donations may be made to the Paul Gordy Memorial Scholarship Fund to benefit the students of Dade County. Donations may be sent to Dade County Schools 52 Tradition Lane Trenton, Ga 30752. Please notate the name of the scholarship with the donation. Funeral services will be held 11 AM Saturday October 27, 2018 in the chapel with Bro. Eddie Cantrell and Bro. Dewayne Roberson officiating. Interment will follow at 3 PM Saturday at Sunrise Memorial Gardens in Lithia Springs, GA. Family will receive friends 6 PM until 8 PM Friday and 10 AM until service time Saturday at Ryan Funeral Home, Trenton, GA.

Tuesday, October 23, 2018 Paul G. Gordy, of Trenton, GA (formerly of Austell, Ga), our Superman, made his final flight winning his battle with cancer. A gentleman always knows when to leave the room and he departed his Earthly home, surrounded... View Obituary & Service Information

The family of Paul Gordy created this Life Tributes page to make it easy to share your memories.

Send flowers to the Gordy family.