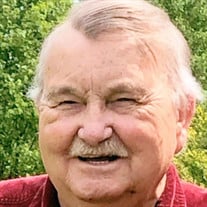 Paul Matthew McBryar, 79, of Bryant, Alabama, went home to be with the Lord on Sunday, August 30, 2020. He was the owner of C&M Pest Control for over forty years. A pastor to the tri-community area, Paul had had an unfathomable love for... View Obituary & Service Information

The family of Paul Matthew McBryar created this Life Tributes page to make it easy to share your memories.

Paul Matthew McBryar, 79, of Bryant, Alabama, went home to be...

Send flowers to the McBryar family.