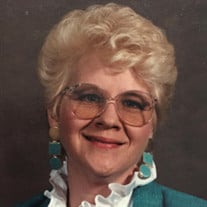 Paulette Yvonne Cannon Emerson, 68, of Flat Rock, AL, passed away on Friday, May 29, 2020. Paulette was of the Baptist faith and had spent most of her life as a housewife. She was preceded in death by her parents, Wayne & Adah Jane Brown Cannon,... View Obituary & Service Information

The family of Paulette Cannon Emerson created this Life Tributes page to make it easy to share your memories.

Send flowers to the Emerson family.