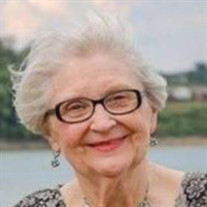 John 14:3: Since I am going and preparing a place for you, I will return to take you with me; so that where I am, you may be also. Peggy Jean May Radcliffe, 82, of Chattanooga, Tennessee, slipped quietly away on Tuesday, July 13, 2021. Peggy was born to Frank and Myrtle Jewell Knight May, better known as Grandaddy and Grandma May, on March 11, 1939, in Hamtramck, Michigan, a small town outside of Detroit. She was an only child until her brother, Terry, came along 14 years later, in 1953. In the summer of 1957, Peg met a handsome army corporal at her Uncle RD’s gas station outside Fort Campbell, Kentucky-William T. Radcliffe Jr. Bill and Peggy married in the spring of 1958. During the early years of their marriage, they lived in several states, including Michigan, Kentucky, Virginia, and Michigan, again, adding five children along the way. Developing her administrative bent came in handy with a family of seven. Over the years Peggy worked for various businesses, companies, and practices, as an administrative assistant. Peggy completed her business career with the Chattanooga City School System, both as a school secretary and finally, as an administrative assistant at the central offices of the Chattanooga City Schools, where her quick wit, mastery of language, unparalleled word processing skills, and high standards of efficiency, made her an indispensable member of this organization. Her administrative skills and her love for working with children extended from education to community involvement in each area where she lived, including civic organizations and her local churches. “Mrs. Radcliffe” to some, “Miss Peggy” to others, and “Grandmaw Peggy” to her own ever-growing clan, Peggy Radcliffe left an indelible imprint of caring for and serving others on each person who had the privilege of knowing her. Peggy is survived by Bill, her faithful husband of 63 years and three of her five children: Scott Radcliffe, of Atlanta, Georgia; Eric Radcliffe, of East Ridge, TN; and Kelly Radcliffe Smith, of Fishersville, VA. Sadly, Peggy was preceded in death by two of her dearly loved sons: William Foster “Bill” Radcliffe, in 1988; and Shaun David Radcliffe, in 2020. Her brother, Terry, and his son, Aaron, currently reside in Warrenton, Michigan. Grandmaw Peggy has also left her legacy with 13 grandchildren, 8 great grandchildren, & numerous nieces, nephews, and cousins, who embody her kind & caring concern for anyone in need, her dry, sarcastic sense of humor, and her love of words. After struggling with debilitating health issues for several years, Peggy is now whole & healthy. As she walks with Jesus, she’s probably singing and dancing too, as she loved to do. She will be terribly missed, but she’s finally at peace and always in our hearts. A visitation will be held on Sunday, July 18, 2021, from 1:30-3:00 p.m., at Lookout Valley Baptist Church. A memorial service will follow at 3:00. Peggy worshipped and served with her church family at LVBC for many years and was consistently supported by them during some of her darkest days. She was also kindly cared for by Hospice of Chattanooga, in her final days. In lieu of flowers, please make a donation to one of these organizations. Philippians 4:8-9 The Message: Summing it all up, friends, I would say you’ll do best by filling your minds and meditating on things true, noble, reputable, authentic, compelling, gracious-the best, not the worst; the beautiful, not the ugly; things to praise, not things to curse. Put into practice what you learned from me, what you heard and saw and realized. Do that, and God, who makes everything work together, will work you into his most excellent harmonies. Services entrusted to Ryan Funeral Home & Crematory, Trenton, GA.

John 14:3: Since I am going and preparing a place for you, I will return to take you with me; so that where I am, you may be also. Peggy Jean May Radcliffe, 82, of Chattanooga, Tennessee, slipped quietly away on Tuesday, July 13, 2021. Peggy... View Obituary & Service Information

The family of Peggy Jean Radcliffe created this Life Tributes page to make it easy to share your memories.

Send flowers to the Radcliffe family.