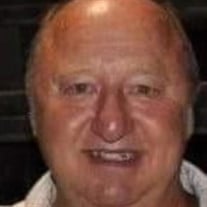 Perry Richard Conkle, 69, of Trenton, GA, passed away on Monday, September 13, 2021 at his residence. Perry attended various Baptist churches and was a member of Straightway Baptist Church. He retired from Northwest Georgia Venture and was... View Obituary & Service Information

The family of Perry Richard Conkle created this Life Tributes page to make it easy to share your memories.

Perry Richard Conkle, 69, of Trenton, GA, passed away on Monday,...

Send flowers to the Conkle family.