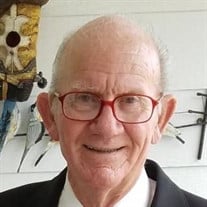 Raymond P. Davis, 84, of Trenton, GA, went home to be with his Lord on Sunday, February 2, 2020 in a local health care facility. He was a devoted husband and father and a Godly man of integrity. Mr. Davis was preceded in death by his parents,... View Obituary & Service Information

The family of Raymond P. Davis created this Life Tributes page to make it easy to share your memories.

Send flowers to the Davis family.