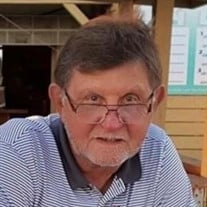 Ronnie David Davis Sr., 71, of Fort Oglethorpe, passed away on February 24, 2021 at home surrounded by family. Ronnie was born in Centre, Alabama and grew up in Jacksonville, Alabama. He attended Jacksonville High School and Jacksonville State University. Ronnie was preceded in death by his wife, Betsee Stone Davis, his parents, Jimmy and Madeline Lindsey Davis and his sister, Johnnie Sue Warmack. He is survived by his two sons, Ronnie (Kim) Davis Jr. and Jonathan "JD" (Rachel) Davis as well as by his greatest joy, his grandchildren, Carter, Anna Belle, Finley and Cooper Davis. He is also survived by his girlfriend and companion of many years, Debra Sullivan. Ronnie is also survived by his brother, Jim Singleton, sister, Dot Green, and several nieces and nephews. Ronnie spent most of his career in finance and sales. During his retirement, he gave to his community by working on the Fort Oglethorpe Downtown Development Authority Committee and volunteering his time at the 6th Cavalry Museum and LFORA recreation. Ronnie never met a stranger and if you were from Alabama, you can bet that he knew someone in your family and you would get a Roll Tide greeting. His greatest joy came from his grandchildren, from births to birthdays or picking them up from school to watching them participate in sports, he was always present, always there. His love for his family was unwavering and without judgment. In lieu of flowers, pay it forward, help someone in need or just treat your fellow man with respect because that is what Ronnie would have wanted us all to do. Expressions of sympathy may be shared at ryanfuneralhome.net. A private service will be held at a later date. Arrangements are by Ryan Funeral Home & Crematory, Trenton, GA.

Ronnie David Davis Sr., 71, of Fort Oglethorpe, passed away on February 24, 2021 at home surrounded by family. Ronnie was born in Centre, Alabama and grew up in Jacksonville, Alabama. He attended Jacksonville High School and Jacksonville... View Obituary & Service Information

The family of Ronnie David Davis, Sr. created this Life Tributes page to make it easy to share your memories.

Ronnie David Davis Sr., 71, of Fort Oglethorpe, passed away on...