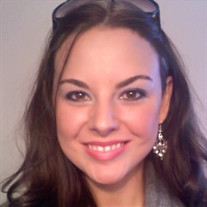 Spring LaDawn (Carr) Daniel, was born, August 11th, 1982, to her loving parents, Eric Carr (Maguire) and Lorena (Carr) Parker. Spring came into this world stubborn and strong. But, with a a gentleness and smile, that could melt hearts. To say, Spring was special, would be an understatement. She was rare! She had a quality of giving so much of herself. And, of fighting for those she cared about with all she had. Her flaw was not doing enough of that for herself. But, Spring's greatest joys came in the gifts of her four daughters. Shy, Aspen, Winter, and Autumn. The moments she had with her girls, were her greatest treasures. And, she held those treasures close to her heart. Spring's life consisted of adventures, and misadventures. Traveling across the country numerous times. From the mountains of Idaho, where she always called home. Then life led her to Cleveland, Tennessee, and then on down to Trenton, Georgia. There wasn't a day that you could call boring with Spring. Because, she would make up a game, or have you cooking in the kitchen along with her. Her nieces and nephews all adored her, and loved their time with their fun aunt. And, you definitely couldn't need something around Spring. Because, she would find a way to meet the need. Whether it was staying by her grandma's side, as she went through chemo treatments. And, finding ways to make her smile through it all. Or, making her homemade chicken soup; when you were down with the flu. All Spring's life, she wanted to be needed. And, we did need her! She was her family's everything, in so many ways. But, this time the Lord needed her more! He said it was her time to come home. And on, October 23, 2021, the angels carried Spring, into Jesus waiting arms. Her Grandpa called her, his mountain girl. Her grandma, her little sweetheart. Her Daddy, little punkin. And, her mom called her, little one. Spring was wife, mother, daughter, granddaughter, sister, aunt, niece, cousin, and friend. And, she was loved dearly by each that called her by those names. But, most importantly, God called Spring, His child. And, she is with Him now! Spring was preceded in death by her sister, Delta Carr, and grandpa, Albert Carr. And, what a reunion they must be having! Spring is survived, loved, and remembered by her husband, Troy Daniel. Her daughters, ShyDawn Lynas, Aspen and Winter Daniel, and Autumn Dobbins. Her father, Eric Carr. Mother and stepdad, Lorena and Steve Parker. Sister and brother-in-law, Erica and Clint Stanley, and family. Brother and sister-in-law, Eric and Reina Carr, and family. Grandma, Clella Carr. And, by her nieces, nephews, aunts, uncles, and many cousins. Visitation will be held at Ryan Funeral Home in Trenton, Georgia, Sunday, November 7th from 12:00 p.m.-6:00 p.m. Funeral services will be held Monday, November 8th, at 11:00a.m. officiated by Rev. Rick Sentell of Cleveland, Tennessee. Arrangements are by Ryan Funeral Home & Crematory, Trenton, GA.

Spring LaDawn (Carr) Daniel, was born, August 11th, 1982, to her loving parents, Eric Carr (Maguire) and Lorena (Carr) Parker. Spring came into this world stubborn and strong. But, with a a gentleness and smile, that could melt hearts. To... View Obituary & Service Information

The family of Spring LaDawn Daniel created this Life Tributes page to make it easy to share your memories.

Send flowers to the Daniel family.