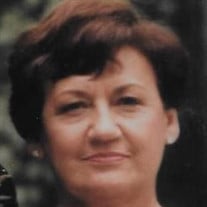 Virginia Williams Reed, 88, of Trenton, went home to be with the Lord on Friday, January 15, 2021. She was a devoted wife to the late Charles “Homer” Reed for 60 years of Trenton, GA. She was a loving mother to her daughter, Martha Reed Hartleb. She was preceded in death by her parents, Thomas Jefferson Williams and Julia Louvenia Cox Williams of Jackson, Co., AL. Her siblings were Burma Williams, “TJ” Williams, Tom Williams, Paul Williams, “Dougan” Williams, Fay Williams, and Wanda Jo Williams. All were raised in Scottsboro, AL. Virginia was Dade County Tax Commissioner in the 1980’s and held the office for 8 years. She also was a long-time member of Trenton First Baptist Church. She is survived by her daughter, Martha and son-in-law Gene Hartleb, two grandsons, three great-grandsons; several nieces and nephews; sister, Josephine. Online expressions of sympathy may be shared at ryanfuneralhome.net. In lieu of flowers, contributions may be made to Trenton First Baptist Church. Graveside services will be held Monday, January 18th at 2:00 p.m. at Lake Hills Memorial Gardens with Rev. Jerry Atkins officiating. There will be no visitation at the funeral home. Arrangements are by Ryan Funeral Home & Crematory, Trenton, GA.

The family of Virginia Williams Reed created this Life Tributes page to make it easy to share your memories.

Virginia Williams Reed, 88, of Trenton, went home to be with...

Send flowers to the Reed family.