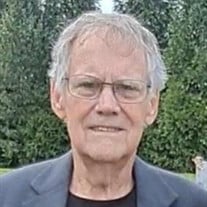 William Craig Green, Craig aka Daddy, Craig 76, of Lookout Mountain, Georgia, fell asleep in Jesus at Memorial Hospital, Chattanooga July 29, 2021. Born February 16, 1945 in Chattanooga to Aubra Freelin "Red" Green and Ms. Rowena Pendergrass, married 1932. Craig's Sister Saralyn Sue Green Kelly was born 1938 - d. 2017, and Brother, Aubra Freelin "AF" Green Jr. born 1942 - d. 2019. Teri Green Campbell, Craig's youngest sister, survives Craig, their parents and brother and sister. Also living in the Fairview area of Hixson, TN, Teri's children, Bryan and Becky, and their children; and Saralyn's daughter Polly. Craig is also survived by his son Marty. Craig's friend and brother to the whole family Martin Hoyal Hayes born 1944, died September 11, 2001. Craig loved his friends, Reunions with them, with family and all survivors loved Craig. Craig enjoyed visiting his cousins Jeff, Joyce and Renee at the graveside memorial for his beloved, sweet, dear Aunt Monice d. July 2021. Craig graduated class of 1963, Red Bank High School and was often seen in his 1965 Mercury Comet Cyclone. He was known to safely maneuver the red HiPo machine along Dayton Blvd. between Lake sites and "Red's" Twin Star Drive In. No Riders for the fast, fun trips, Except for Blondes, Brunettes, Redheads. Craig's superior driving skills appear as having been noticed by the United States Army - as they soon requested him serve the USA. He drove a truck all over Europe and Germany. Craig served Proudly. Craig returned home to spend the very early 70's in the old homeplaces of his beloved aunts and uncles from the Mcminnville, middle-Tn and Smithville area lakes and farms; boating and enjoying music and friends in the little country haven where music grew with crops. He loved all children as his own then, and through his whole life, especially his nieces Beth (d. 2017) and Polly. Many children who loved Craig, grew up, as children tend to do, later referring to Craig as Daddy, Pops, or Daddy Craig and loving him just the same. Born in Germany to an American GI and German mother, and named after Marlene Dietrich see "Lili Marlene." Marlene, graduated 1973, Red Bank High School (same as Craig, different decade.) These two met that same year, and married early 74' and became life-long best friends. The following year they had a son Martin Craig "Marty" Green who survives them. Craig and Marlene as individuals were the life of any event. Together, they were the love of life, the perfect balance of pursuing their passions in life together - a living sitcom, occasionally with an audience, often with special guest stars and returning cast members. Craig and Marlene worked side by side, in the floral business, Green's Plantershop and while homeschooling Marty. Craig later worked as a Safety Inspector. Craig's work allowed him to take his skills to towns around and far beyond Chattanooga. He became a beloved character to many businesses, schools and hospitals - some local to Chattanooga: Mccallie, Chattem, Olin Chemical, NA Industries, Memorial. Marlene would become a Master Tailor, a familiar figure in downtown Chattanooga. Craig retired from Simple/Grinnell in 2017. Craig and Marlene enjoyed each moment of their active lives together, and with Marty. The couple retired to enjoy the deep woods - on a rock-bluff of Lookout Mountain, Georgia. Sadly Marlene passed in 2017 Craig was so much, a comedian, peace maker, and a source of loud, restless calm that put us at ease and helped us maintain even in difficult times. He came in, did what was to do, and then he did his thing, he made our jaws hurt, and then, he left. Craig was often singing, and praising God through song, going to music events and festivals, and dances. He hummed and even shouted the song in his heart for everybody, even at seemingly wildly inappropriate times and times where there just was no music - but...that very minute - needed something. He was in tune and just right and we loved him. Craig and Marty, like many of recent, enjoyed time at home. In-person visiting local Seventh-Day and Sunday Church's services turned safely to online. There will be no visitation at this time. As safety measures and options for safe social gatherings increase Craig and Marty have been blessed by special times, meals with friends, through prayer and studying the Word, and very Happy Sabbaths' together. Blessed also by the God loving, healers, Nurses and Doctors especially everyone at Memorial Hospital. Craig very much wished that upon his passing you, eat, dance, and celebrate your life as you celebrate his, Praise, Thank and Think God, alone, together as families and groups of friends, and all-together, only when safely possible. Share messages, and comments for Craig's family and friends, enjoy photos, listen to Craigs current song playlist, plan a celebration here www.daddycraig.com Graveside services will be held 2:30 Friday, August 6, 2021 at the Chattanooga National Cemetery with full military honors. Arrangements are by Ryan Funeral Home & Crematory, Trenton, GA.

The family of William Craig Green created this Life Tributes page to make it easy to share your memories.

Send flowers to the Green family.