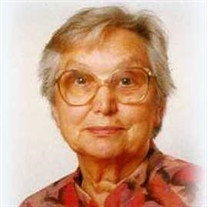 Zelphia Margaret (Horrocks) Hewitt, age 91, of Trenton, GA went home to be with the Lord on Wednesday, June 1, 2016. She was preceded in death by her parents; Thomas Horrocks and Beulah Faylor Horrocks Otto, her husband Eric Hewitt, 6 brothers; Kenneth Horrocks, Otis (Margaret) Horrocks, Elton (Margaret) Horrocks, Otto (Elenor) Horrocks, Keith (Edith) Otto, Francis (Coreen) Otto. Zelphia was born in Ionia, MI. As a young girl, she loved the Lord and felt the calling to the mission field. She attended Moody Bible Institute in Chicago, IL. This led to her first missionary trip to Africa in 1949 aboard the SS Good Hope. While serving orphans and other missionaries in Africa, Zelphia met Eric Hewitt from England and they married in 1953 in Northern Rhodesia, Africa. After 16 years of service in Africa where they oversaw multiple schools, cared for orphans, translated books of the Bible and served other missionaries, the couple returned to England to care for Eric’s aging parents. For 24 years, Eric and Zelphia faithfully served their local church but then felt the call to return to Africa for a short term. Following this second term, they lived in England until Eric’s death in 2001 after which Zelphia returned home to the States to be with her family. She was faithful to serve in her home church until she was no longer able to serve due to her health. Zelphia is survived by two sisters, Delores (Larry) Dyer, Lois (Merritt) Johnson, as well as many nieces and nephews. A celebration of her life will be held in Michigan over Labor Day weekend. Friends and family are welcome to attend. Arrangements by Ryan Funeral Home, Trenton, GA.

Zelphia Margaret (Horrocks) Hewitt, age 91, of Trenton, GA went home to be with the Lord on Wednesday, June 1, 2016. She was preceded in death by her parents; Thomas Horrocks and Beulah Faylor Horrocks Otto, her husband Eric Hewitt,... View Obituary & Service Information

The family of Zelphia Margaret Hewitt created this Life Tributes page to make it easy to share your memories.

Send flowers to the Hewitt family.